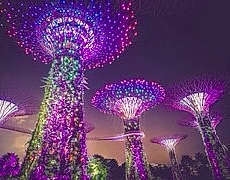 Nate took the photo out of his back pocket.  It was dog-eared, creased and faded after years of wear and travel, but the images were still stunning.  As a boy, he and his father had spent many hours in the library, passing the time, flipping through books about faraway places.  This picture, of architectural structures in Singapore called Supertrees, lit up in neon colors like stationary fireworks, had captured his imagination.  Unbeknownst to his father, he’d stealthily ripped the photo from the book and slipped it into his pocket.

“Flight 1016 now boarding,” said a feminine voice over the intercom.

Nate grabbed his carry-on and made his way to the gate.  Sadly, his dad wouldn’t be able to make this trip.   Their challenging way of life had taken its on toll on his health.  The last time he saw him, his dad made him swear he would travel for the both of them after he was gone.  As Nate handed the agent his ticket, he smiled, happy to have kept his promise.

For Flash Fiction for Aspiring Writers!